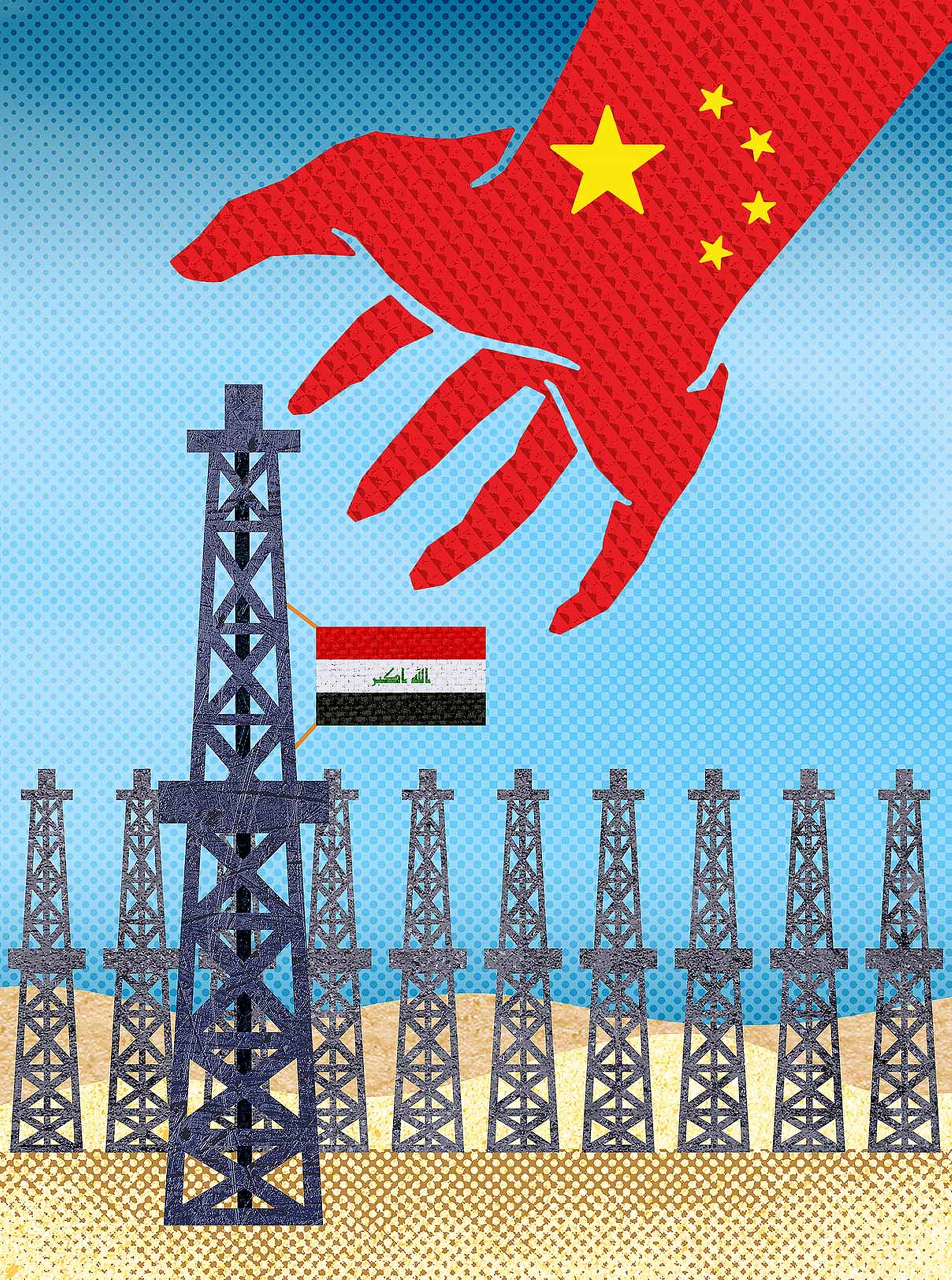 In 2003, the American invasion of Iraq freed the Iraqi people from the tyrannical regime of Saddam Hussein. Nearly two decades later, China has been busy exploiting Iraq’s oil resources by aligning itself with militia groups to gain a foothold in the country’s lucrative oil industry.

So far, China has made three attempts to take control of Iraq’s oil resources, but each attempt has been foiled by the Iraqi Oil Ministry. For example, Russia’s Lukoil and US oil giant Exxon Mobil wanted to sell their stakes in major fields to companies backed by the Chinese government, but the intervention of the Iraqi Oil Ministry prevented this. Even Britain’s BP was considering selling a stake to a Chinese company but was dissuaded by Iraqi officials. If China had succeeded, it could well have triggered an “exodus” of international oil giants that would leave Iraq open to a wider takeover by Beijing. Iraqi government officials have previously expressed deep concern over the rapid pace at which China is attempting to virtually take control of Iraq. A recent protest near the headquarters of a Chinese oil company in Iraq’s southeastern Maysan governorate has once again highlighted Iraq’s growing concern over the expansion of China in the oil sector.

According to Italian think tank Geopolitica, China is exploiting the security vacuum in Iraq created after the US withdrew from the West Asian country, with its companies aligning themselves with militias to gain a foothold in the oil industry. Iraqi. A report by the Financial Times said that in 2021 alone, Beijing secured deals worth $10.5 billion in Iraq’s construction sector. Iraq, China’s third-largest oil exporter, is eager to secure Chinese investment in infrastructure development. Indeed, several US and European companies have been reluctant to invest in Iraq due to endemic corruption and militias (apparently loyal to Iran) targeting US coalition forces and Western interests.

Unlike others, Beijing has found ways to work within this system and deal with deep structural corruption and the domination of Iraqi public space by militias. In fact, Iran is the de facto arbiter of power in Iraq, through its client military and political organizations. Although China prefers to work with strong, centralized state authorities, it has found ways to deal with an unstable Iraq. According to a recent report by Fudan University in Shanghai, in 2021 Beijing won new construction contracts in Iraq worth $10.5 billion, accounting for nearly one-sixth of China’s investment in Iraq. Belt and Road Initiative that year.

For China, Iraq has become the region’s largest trading partner and the third largest oil supplier, just after Saudi Arabia and Russia. Its energy reserves and strategic location – close to the Persian Gulf and the Strait of Hormuz – prove essential for the BRI. With the American withdrawal from the region, Beijing was poised to expand its influence; improved economic relations with Baghdad will likely result in political influence over a period of time.

Experts say China’s role in rebuilding Iraq and developing Sino-Iranian relations is accelerating Beijing’s presence in Iraq at the expense of the United States. The United States, Iran and Turkey, all actively and deeply linked to Iraq, are watching China’s actions closely.

Sino-Iraqi energy cooperation has been the cornerstone of bilateral relations between the two countries since 1981. At this point, it is estimated that Iraq will need $88 billion for its post-Daesh reconstruction needs, which will provide a ample opportunity in Beijing. increase its visibility through investment and construction. As bilateral trade topped $30 billion in 2018, relations grew stronger under former Iraqi Prime Minister Adel Abdul Mahdi, who described relations as on the verge of a “quantum leap” during Beijing’s visit in 2019. In the first half of 2021, the trade volume between the two countries exceeded $16 billion.

Clever China has always used “soft power” strategies to gain control over countries that needed money. In the case of Iraq too, Beijing has done the same, in stark contrast to the hard power initiatives of the United States. Soft power strategies include economic investments and hands-off policies. Beijing has recently taken advantage of post-conflict opportunities with mediation efforts and commercial engagement as opposed to military involvement and discourse elsewhere. He has also repeatedly used his UN veto power, acting with Russia and against the Western bloc on the Syrian conflict. She is more active in major regional issues such as Afghanistan. China also wants to prevent the United States from using political and military power in Iraq, as needed.

China has a vested interest in the oil and energy sectors. Beijing has built power plants, factories, water treatment facilities, as well as much-needed schools across the country, according to the Los Angeles Times. Dozens of contracts signed in recent years ensure China’s growing footprint, even as major Western companies, including the United States, prepare to exit. While Iraqi officials admit they want a greater US presence, they find appeal in China’s development offer with no conditions for democracy or reform and its deft diplomacy. As a result, Chinese companies dominate Iraq’s key economic sector, oil, and Beijing consumes 40% of the country’s crude exports. From a narrow concentration on hydrocarbons, Chinese investments have multiplied. Chinese companies operate in many key sectors – including finance, transportation, construction and communications – as noted by the Los Angeles Times.

In the oil sector too, Chinese companies dominate oil contracts – from field production to the provision of downstream services, and they continue to earn more. Recently, Iraq finalized terms with China’s Sinopec to develop the Mansuriya gas field, which could produce up to 300 million standard cubic feet per day.

Although Baghdad has expressed deep concern over China’s control over Iraqi resources, it is worrying that Iraq could become a puppet in China’s hands for the foreseeable future. The only way to counter these efforts, it seems clear, is for the United States to up its diplomatic and economic game.

This means, first and foremost, that the United States should present America’s strategic competition with China in Iraq as an ideological competition between democracy and autocracy. The United States should make concerted diplomatic and economic efforts to strengthen Iraqi democracy, which would strengthen its independence and the sovereignty of the Iraqi people. For example, through initiatives such as the Global Infrastructure and Investment Partnership – which President Biden and other G7 leaders unveiled in late June and which will mobilize $600 billion in investment by 2027 to deliver “transparent” and “game-changing” infrastructure projects in developing countries – the United States must present itself to Iraq as a more reliable, supportive and like-minded partner.

• Jianli Yang is founder and president of Citizen Power Initiatives for China and author of For Us, the Living: A Journey to Shine the Light on Truth.