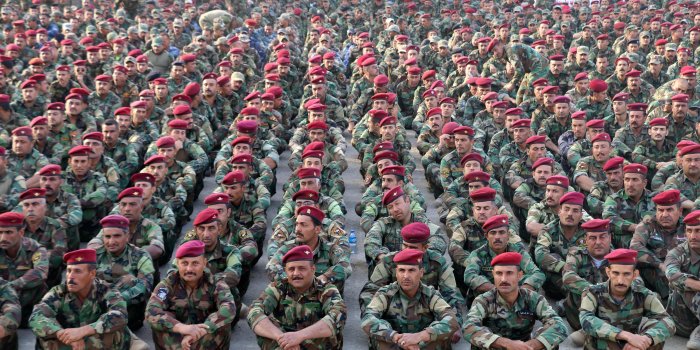 ERBIL, Iraq – Iraqi forces launched an offensive on Thursday to rout ISIS from its last stronghold in the country, while advancing against Kurdish fighters on a separate front.

Iraqi Prime Minister Haider al-Abadi has announced the start of the military operation to retake the town of al-Qaim on Iraq’s western border with Syria. Meanwhile, Kurdish Peshmerga fighters in northern Iraq have said they are under attack by Iraqi government forces using heavy artillery, as the government escalates its conflict with its former allies in the war against The Islamic State.

Iraqi army spokespersons could not be reached immediately for comment.

â€œGet out of your lairs and abandon them before sunset,â€ leaflets dropped by the Iraqi Air Force on al-Qaim and the nearby town of Rawa said overnight. The leaflets said the forces would “liberate” the towns of Anbar province as they did Mosul, Iraq’s second largest city, after a battle lasting several months.

In recent months, the Islamic State has been driven out of most of its self-proclaimed caliphate, or religious empire, covering Iraq and Syria.

The Peshmerga and Iraqi forces were allies in the war against Islamic State. But as their common enemy nears defeat, they have turned on each other.

Iraqi forces moved against the Peshmerga earlier in October after the Kurds, who rule their own semi-autonomous region, held a September 25 referendum on independence. The Kurds led the vote not only in their own region, but also in the disputed territories which they effectively annexed during the war against Islamic State, angering the central government in Baghdad.

Baghdad has deployed troops to reclaim disputed areas, dislodging Kurdish fighters from a large area including the oil-rich city of Kirkuk. It was a dramatic turn of fortune for the Kurds.

The Kurdistan regional government made its first major concession on Wednesday, proposing to suspend the referendum results in a bid to open dialogue with Baghdad and avoid losing further ground to Iraqi forces.

The Kurdistan Security Council warned of the impending Iraqi attack on Wednesday evening and criticized the United States, which said the Iraqi central government was entitled to reassert its authority outside Kurdistan’s official borders and over border posts with neighboring countries.

“Despite the KRG’s flexibility and repeated calls for dialogue, the US-led global coalition and the US government in particular have signaled their tacit approval by dangerously and wrongly referring to the need for law enforcement,” said the Kurdish Security Council.

US coalition spokesman Colonel Ryan Dillon rejected the Kurds’ accusation that the coalition was giving Iraqi forces the green light to attack the Peshmerga.

“This is something we don’t agree with. The conflict that has arisen and the tension – we want them to refocus on defeat against ISIS …

A senior US official said on Wednesday that there had been excesses on both sides in the conflict between the central government and the Kurds. He called for a cessation of hostilities and offered US assistance for disengagement.

During a visit to neighboring Iran on Thursday, Abadi once again insisted on the complete annulment of the Kurdish referendum and said he wanted the disputed territories to submit to state authority.

Early Thursday, Iraqi military forces and allied paramilitary groups began advancing against the Peshmerga, heading towards the strategic Fishkhabour triangle, where the borders of Turkey, Iraq and Syria converge.

The Kurds control a border post with Syria in the region, which lies within the formal boundaries of their region bounded by the Green Line. The Green Line dates back to the imposition by the international community of a no-fly zone in northern Iraq in 1991 to protect the Kurds from attacks by former dictator Saddam Hussein.

This border was formalized in the constitution drafted after the overthrow of Mr. Hussein during the US-led invasion in 2003. Authority over border posts controlled by the Kurds.

Iraqi militias in Washington: get your troops out of Iraq