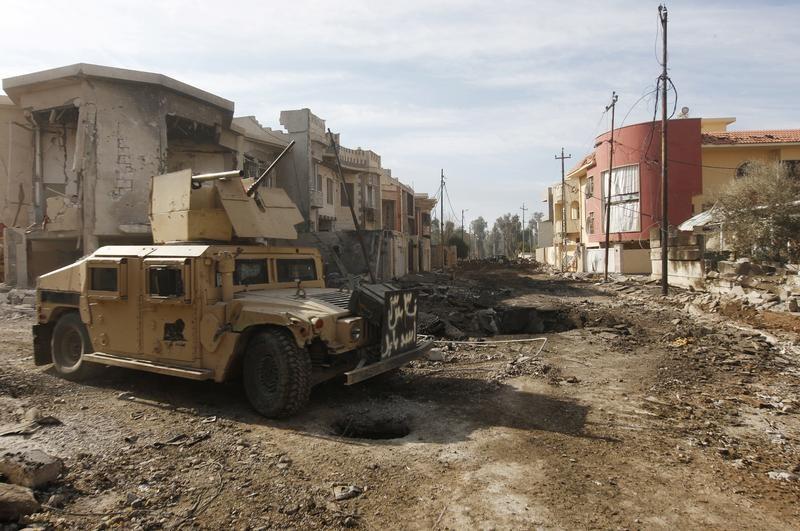 BAGHDAD (Reuters) – Iraqi officials said on Monday government forces had taken full control of eastern Mosul, 100 days into their U.S.-backed campaign to root out Islamic State militants from the city.

The deputy speaker of parliament announced the capture of the east of the city, the last major stronghold of the Islamic State in Iraq, after a meeting with Prime Minister Haider al-Abadi.

“We have completed the total liberation of the left bank of Mosul and this is a gift to the Iraqi people,” Sheikh Humam Hamoudi said in a statement.

The army entered Rashidiya, the last district under militant control on the east bank of the Tigris on Sunday, military spokesman Brigadier General Yahya Rasool said.

Search operations were still underway on Monday to flush out the remaining militants in a pocket of this northeastern district, he said in a statement.

A resident of Rashidiya said the army stormed the area after airstrikes destroyed a tank and a car bomb the militants were preparing to attack.

A resident of Zanjali, a neighborhood west of Mosul, said Islamic State fighters “came from the left bank and are trying to find houses on the right bank”, fleeing the advancing forces governmental. The resident asked not to be identified as militants kill those caught talking with the outside world.

Iraqi forces launched a campaign on October 17 to retake Mosul from the extremist Sunni group, which captured the city in 2014, declaring from its Grand Mosque a “caliphate” that also spanned parts of Syria, ruled by its leader Abu Bakr al-Baghdadi.

The Defense Ministry had issued a statement on Monday announcing the full takeover of eastern Mosul, adding that Abadi would make an official announcement later. The statement was later removed from the ministry’s website.

A US-led coalition is providing air and ground support to Iraqi forces.

The western side of Mosul could prove more complicated to borrow than the east because it is crisscrossed with streets too narrow for armored vehicles.

The militants are expected to fight an uphill battle as they are cornered in a declining area of ​​the city in northern Iraq.

Mosul had a pre-war population of nearly 2 million, and it is estimated that around 750,000 people live in western Mosul. More than 160,000 people have been displaced since the start of the offensive, according to the United Nations.

The battle for Mosul, involving 100,000 Iraqi troops, members of the Kurdish security forces and Shiite militiamen, is the largest ground operation in Iraq since the US invasion in 2003.

Iraqi forces estimated the number of militants inside the city at between 5,000 and 6,000 when operations began three months ago, and say 3,300 have been killed in the fighting since.

Militants blew up a historic hotel in west Mosul on Friday in an apparent attempt to prevent advancing Iraqi forces from using it as a base or sniper position as the fighting moves west of the Tiger.

Mosul Hotel, shaped like a stepped pyramid, stands near the river.

State television said the army had set up temporary bridges over the Tigris River south of Mosul to allow troops to cross in preparation for the offensive on the western bank.

The city’s five permanent bridges over the Tigris were damaged by US-led airstrikes and Islamic State blew up two of them.