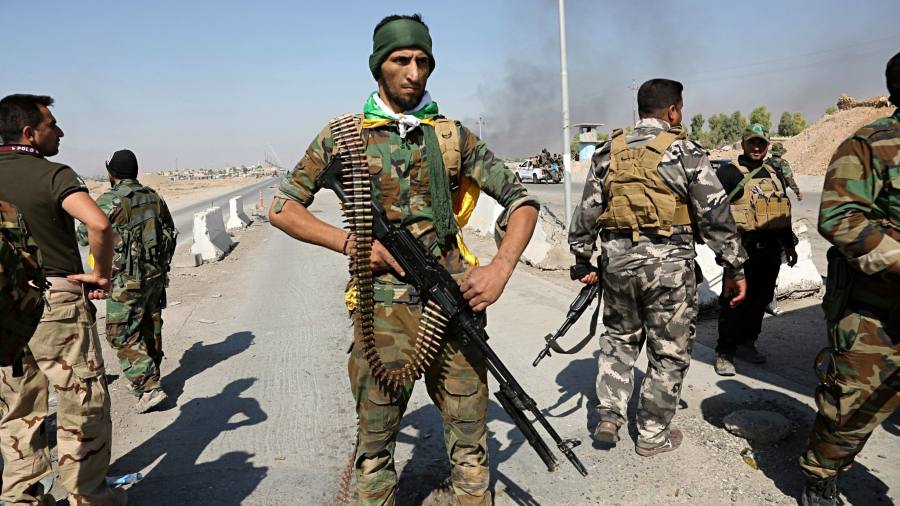 Iraqi forces pushed through a series of Kurdish-claimed Kurdish-held areas and Baghdad on Tuesday in a bid to regain control of territory lost after the war with Isis and step up pressure on the regional self-governing government of Kurdistan.

Iraqi forces reportedly recaptured Gwer and Makhmour, south of Erbil, a day after taking the disputed oil city of Kirkuk. They also took the Khanaqin region on the Iranian border. Earlier on Tuesday, local Iraqi paramilitary forces occupied the northwestern town of Sinjar.

Iraqi federal forces have also taken control of the Bai Hassan and Avana oil fields, according to KRG officials. Peshmerga forces withdrew without a fight, and the KRG-controlled gas pipeline to the Turkish Mediterranean port of Ceyhan remained open.

The recaptured areas all appeared to have been handed over to Iraqi forces without any resistance, according to local media.

Iraqi Prime Minister Haider al-Abadi appears to be following through on his vow to take back all the territory the Iraqi government lost in 2014 after the Islamic State swept through northern Iraq and established its self-declared caliphate. With the support of a US-led international coalition, Baghdad and Erbil reclaimed almost all the territory lost to ISIS, but the downfall of the militants gave way to a bitter feud between Baghdad and the GRK.

The disputed areas were included in last month’s Kurdish independence referendum, which was championed by KRG chairman Masoud Barzani. He followed the vote despite strong objections from neighboring states and Washington and won an overwhelming yes for breaking with Iraq.

But now the Kurds are under intense pressure from Baghdad and neighboring Turkey and Iran, who fear the referendum will inspire their own Kurdish populations to push for greater autonomy.

Mr Barzani canceled a speech on Tuesday and instead issued a statement calling for unity among Kurdish factions amid growing animosity between his ruling party, the Kurdistan Democratic Party (KDP) and the rival Kurdish party. Patriotic Union of Kurdistan (PUK).

“We reassure our people that we will do whatever is necessary to protect and preserve the stability of the Kurdistan region,” he said in his first comments since the crisis began.

Yet he indirectly attacked the PUK, which is widely believed to have struck a deal with Baghdad to hand over the Kirkuk facilities to it. It was unclear whether the series of advances by the Iraqi army today was also part of such an agreement.

“What happened in the battle of Kirkuk is the result of an individual decision taken by certain individuals belonging to a political group inside Kurdistan, and the result was the withdrawal of the peshmergas in this way, what everyone saw,” Barzani said. noted.

In the northwestern region of Sinjar, the Kurdish TV channel Rudaw said peshmerga fighters withdrew from their positions in the town of Sinjar, which were later taken over by local units of the Popular Mobilization Forces, Iraqi militias.

The mostly Shia volunteer force was created to fight Isis, but many factions are under Iranian influence. As the town appeared to have surrendered without a fight, Peshmerga forces fought back and repelled another PMF advance into eastern Sinjar, Kurdish media reported.

The withdrawals appear to be following a similar pattern to the Iraqi military advance on Kirkuk on Monday. Despite sporadic clashes, much of the city and its military and oil installations were abandoned without a fight.

Washington called on its allies to remain focused on defeating the Islamic State. Late Monday, Rudaw said Islamic State militants briefly attacked the Dibis area, south of Kirkuk, amid confusion over who controlled the area. The reports have not been confirmed.

Residents of Kirkuk said the city was calm on Tuesday after a day of sporadic clashes.

The KRG exports more than 550,000 barrels of oil per day, the majority from Kirkuk and surrounding fields, and production in Kurdish-controlled territories accounts for about 15% of Iraq’s total production. Brent crude oil, the international benchmark, slipped to $57 on Tuesday after hitting its highest level this month the previous day.

Two traders, who gave prepaid loans to Kurds in exchange for oil from the region, said they expected shipments to continue as it is in both parties’ interests to get the oil to the Marlet. They said while the risks have clearly increased, the oil situation could have been much worse had Kurdish forces tried to retain control of the fields.

Sinjar is home to Iraq’s minority Yazidi population, whose inhabitants were massacred and enslaved by Isis and became part of the justification used by the United States to intervene and help Iraq crush the jihadist group.

The city has since become hotly contested due to its strategic location near the war-torn Syria border, and is of prime interest to Iran-backed Iraqi militias seeking to establish roads and settlements. Tehran’s spheres of influence across Iraq and Syria. and to Lebanon.

Although Baghdad’s takeover of Kirkuk appears to have been carried out by Iraqi federal forces, Tehran-friendly PMF leader Abu Mahdi al-Muhandis has taken to social media to acknowledge the role of the Shiite militia in the recovery of the city.

“Police forces will take care of security in the city and the PMF and the remaining forces [of Iraq] will support them whenever needed,” he tweeted.

The PMF’s involvement will be seen as particularly provocative to Kurdish factions who argue that the current takeovers are occurring under Iranian oversight.

So far, Iraqi officials have only taken over disputed areas, but Kurds have expressed concern that some emboldened factions, such as the PMF, might try to press for further gains.

“If Iraq goes too far and does not seize the moment for negotiations, we risk a protracted conflict,” said Barham Salih, a former PUK official who has now formed his own party. “We have seen these cycles in modern Iraqi history.”