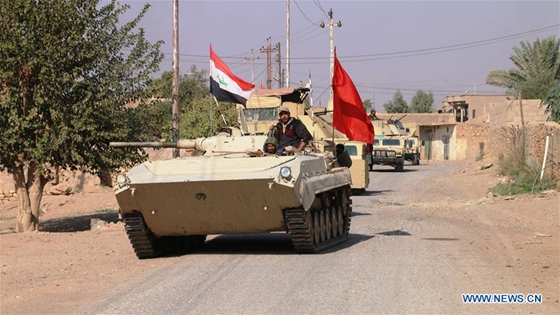 Iraqi security forces fighting Islamic State (IS) militants liberated the town of Rawa near the border with Syria on Friday, dislodging extremist militants from their last urban stronghold in Iraq, the Iraqi military said.

Paramilitary troops and local tribal fighters have fully liberated Rawa and raised the Iraqi flag on some of its buildings, offensive commander Lt. Gen. Abdul Amir Yarallah said in a brief statement.

At dawn, Iraqi forces entered Rawa from three directions and liberated four neighborhoods in the western part of the city, Yarallah said in an earlier statement.

Meanwhile, Iraqi Prime Minister Haider al-Abadi congratulated the Iraqi people and security forces for the liberation of Rawa, located about 80 km east of the newly liberated town of al-Qaim.

Abadi, also commander-in-chief of Iraqi forces, made the comments during a visit to the Joint Operations Command headquarters in Baghdad, the Iraqi capital, according to a statement released by Abadi’s office.

“The release of Rawa within hours reflects the great strength and power of our heroic armed forces and successful battle planning,” Abadi said.

He also said Iraqi forces were continuing to clear the rural area and nearby desert to secure Iraq’s border with Syria.

On November 5, Abadi raised the Iraqi flag at the Husaibah border crossing with Syria two days after Iraqi forces recaptured it and the nearby town of al-Qaim from extremist militants.

Troops will continue to clear villages in the vast rural areas north of the Euphrates as well as the desert between the provinces of Anbar and neighboring Salahudin.

On October 26, security forces launched a major offensive to liberate ISIS’s last urban stronghold in Iraq near the Iraqi-Syrian border.

IS militants seized large swaths of territory in Iraq in 2014. After three years of fighting, Iraqi forces recaptured most of the areas occupied from the terror group, including the country’s second largest city, Mosul .