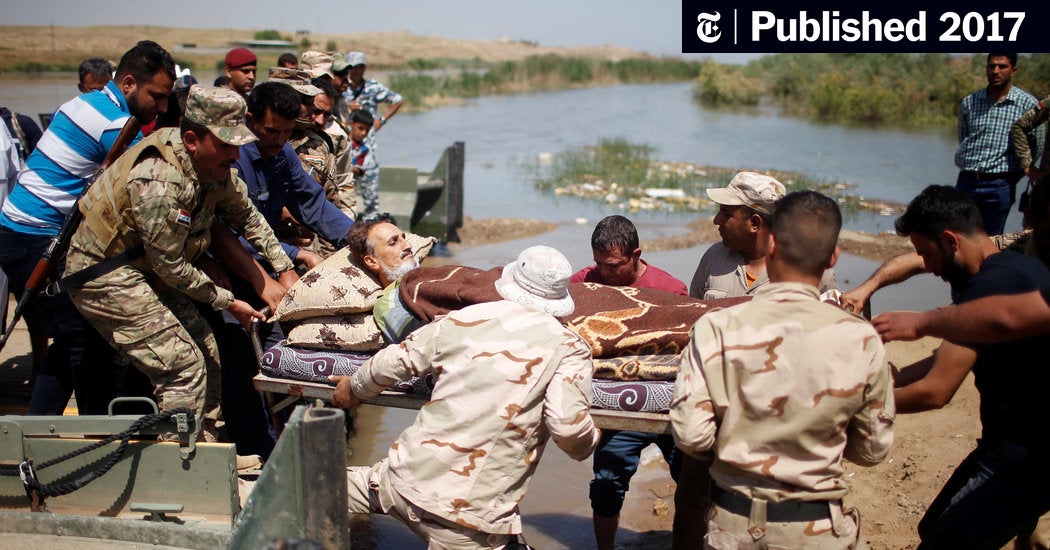 Iraqi forces opened a new front in western Mosul on Thursday in a major shift meant to speed up an operation that had stalled, leaving hundreds of thousands of civilians trapped in an urban battlefield.

The attack began early in the day when the Iraqi army’s 9th Division and Interior Ministry troops who had been withdrawn from another combat mission began entering Mosul from the north, according to a Iraqi military statement.

The Iraqi counter-terrorism service has forced its way in from the south, and the aim of the new operation is to force the Islamic State, also known as ISIS or ISIL, to fight in several directions and collapse his defences.

Hinting at the change in strategy, Lt. Gen. Othman al-Ghanmi, Iraqi army chief of staff, recently told an official newspaper that the battle for Mosul, now in its seventh month, would be won “in the shortest possible time”. three weeks.”

Yet Iraqi forces face hundreds of militants who seem determined to fight to the bitter end in neighborhoods still teeming with starving and increasingly desperate civilians.

The new operation will also require careful synchronization between the Iraqi army, Interior Ministry troops and the counterterrorism department, which report to different authorities in Baghdad and sometimes seem to be fighting separate wars.

Tensions between Iraq’s disparate forces came to the fore during a closed-door meeting Prime Minister Haider al-Abadi called in mid-April in Hamam al-Alil, a town nestled on the Tigris about 24 km southeast of Mosul. Dressed in the black uniform of the Counter Terrorism Service, Mr Abadi warned his commanders that prolonging the battle for the city would only work in favor of the Islamic State and signaled that it was time to step up the pace.

But that was followed by a heated debate among frustrated Iraqi commanders over which of their units made the biggest sacrifice and who should shoulder the burden of the next stage of the battle.

Lt. Gen. Raed Shaker Jawdat, the commander of the Federal Police, who suffered many casualties as they advanced from the south along the Tigris, complained that his forces were fighting hard but the Iraqi army was not had not yet entered the city, filled with snipers and car bombs.

But Lt. Gen. Abdul-Amir Rasheed Yar Allah, head of the Ninewa province operations center which oversees the Mosul battle, pointed the finger at federal police, complaining that their once daring assault was no longer gaining ground. .

Highlighting the issues, the meeting room was decorated with portraits of Iraqi soldiers killed in the campaign against the Islamic State.

“The purpose of the meeting was to ask whether the federal police had done their job and how to get the army to participate more in the fighting inside the city,” said Lt. Gen. Abdul-Wahab al-Saadi, a senior commander with the Counterterrorism Service, who attended the meeting.

“Each of the leaders was trying to say that their force had done their best, but let’s see the reality on the ground,” added General Saadi, saying his counter-terrorism service had reclaimed the most territory from the Islamic State.

In the days of consultations with his fellow commanders that followed, General Yar Allah appeared to have overcome many tensions and built consensus on a new plan. It gives the Ninth Division a new role and has been quietly backed by Lt. Gen. Stephen J. Townsend, who commands the US-led task force fighting Islamic State in Iraq and Syria.

The Ninth Division, an armored unit, had positioned itself north of Mosul after fighting its way along a dusty ridge west of the city to cut off Islamic State supply lines and potential escape routes to the west.

The division’s push south is bolstered by troops from the Ministry of Interior’s Emergency Response Division and two army brigades that have been withdrawn from security duties in the east of Mosul and near Tal Afar.

The theory is that attacking from the north will force the Islamic State to split up its defensive operations and facilitate the advance of the counterterrorism service from the south. The Federal Police also maintains its position in the southern part of West Mosul.

The operation was timed to coincide with clear weather so that US Apache attack helicopters, armed drones and fighter jets piloted by the US and its allies could provide ready air support. At least one Iraqi F-16 also carried out airstrikes; the Iraqi army said the target was factories making car bombs.

But strengthening the Ninth Division will involve compromises. At least some of the emergency response forces that were sent to reinforce the division have been repositioned from southwest Mosul.

This will remove some of the military pressure on Islamic State fighters in the densely populated old part of Mosul, which still emerges as the toughest battleground and includes the Grand Mosque where leader Abu Bakr al-Baghdadi of the Islamic State, delivered a public sermon in July 2014.

Iraqi commanders appear to be calculating that they can clear much of western Mosul and leave the Old City for last.

Colonel John L. Dorrian, spokesman for the US command in Baghdad, said on Wednesday that the Islamic State force in Mosul was “well short of a thousand fighters”, but added that they “will be very difficult to obtain”. out.”

“When in this type of dense urban terrain, a small number of fighters can control this territory,” he added.

The Counterterrorism Service was established by the United States shortly after the 2003 invasion to conduct raids to capture or kill militants. He reports directly to the Prime Minister and has assumed a leading role in large-scale urban operations against the Islamic State because he is the best trained and most capable of Iraq’s fighting forces.

Iraq’s military, which the US-led coalition struggled to rebuild after Mosul was lost to Islamic State in 2014, reports to the Defense Ministry. The Federal Police and the Emergency Response Division both report to the Ministry of the Interior.

The Iraqis struggled to synchronize their forces when they launched their offensive to retake the eastern half of Mosul in October. But US military officials insist coordination between Iraqi forces subsequently improved with the help of US advisers.

Iraqi militias find relics destroyed by IS in old town