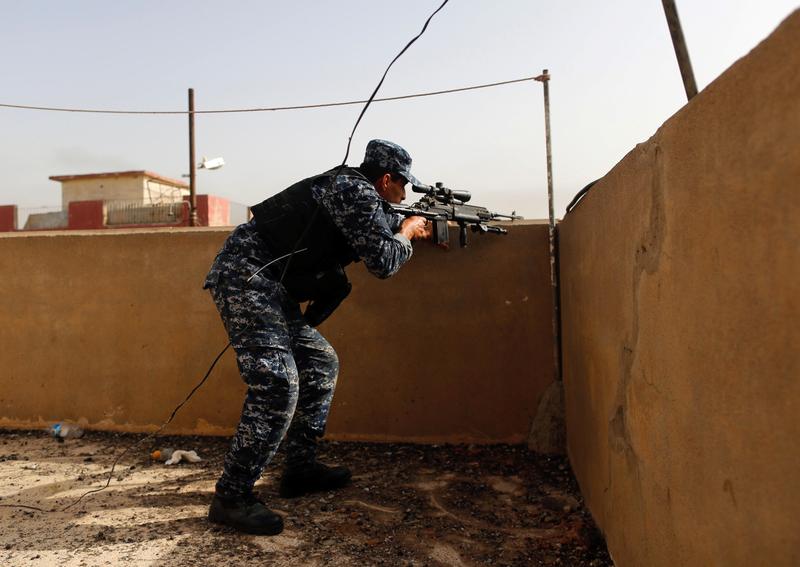 MOSUL/BAGDAD (Reuters) – Iraqi forces battled on Monday to retake areas of western Mosul still under Islamic State control, aiming to secure victory ahead of the holy month of Ramadan.

After seven months of fighting, militants have been dislodged from almost all areas of Mosul. The Islamic State is expected to make a last stand around the great al-Nuri mosque in the old city, where the Islamist group’s black flag has flown since June 2014.

Backed by airstrikes and advisors from the US-led coalition, Iraqi forces have made rapid progress since opening a new front in northwest Mosul earlier this month, closing in on the old Town.

Outnumbered, the militants retaliated with car bombs and embedded snipers among the hundreds of thousands of civilians trapped in western Mosul. Many residents were killed by militants or heavy shelling.

“If we move quickly, we can finish it in a few days,” first lieutenant Nawfal al-Dhari told Reuters in a house turned temporary base in the western district of Islah al-Ziraie, recaptured by Iraqi forces there. three days ago.

“These are their last breaths. They are completely surrounded.

He said the impetus was with Iraq’s elite Counter Terrorism Service (CTS), the US-trained special forces that led the campaign to retake the country’s second city, despite continued resistance Islamic State fighters.

Retaking the mosque, where Islamic State leader Abu Bakr al-Baghdadi in 2014 declared a “caliphate” spanning swathes of Syria and Iraq, would be both a symbolic and strategic victory.

Military commanders and intelligence officials say they aim to take control of the al-Nuri mosque before the start of Ramadan at the end of this month so they can declare the battle won, even as militants continue to fight. keep in their pockets.

They said the number of Islamic State militants still fighting was dwindling and that they were increasingly disorganized and running out of weapons, ammunition and equipment after months of siege.

“Daesh is losing the ability to retaliate. It is obvious that they are doing stupid things. We want to make the old city a closed coffin for Daesh,” said an Iraqi army intelligence colonel, using an Arabic term for Islamic State.

“Yes, there will be remnants of Daesh inside the Old City, but it will be as simple as chasing rabbits to put them down.”

The maze of densely populated houses and alleyways, with Roman, Ottoman and Persian traces, proved a complex battleground for Iraqi troops against a skilled enemy ready to use civilians as shields.

Iraqi forces have attempted to open multiple fronts in an attempt to divide Islamic State militants, who have had two years to prepare their defences.

US-backed airstrikes in densely populated neighborhoods have been made more difficult, according to government forces, by their efforts to avoid civilian casualties.

The Iraqi government said last week that the number of people fleeing Mosul had more than doubled to around 10,000 a day.

“Our advance on a broad front has stunned the enemy and, God willing, we will achieve victory before Ramadan and announce the liberation of Mosul and the people of Mosul from the filth of Daesh,” Lt. Gen. Othman al-Ghanmi, chief of staff, said in a video released by the defense ministry.

He was speaking during a visit to the frontlines in western Mosul. Ramadan is expected to start on May 27.

“The more they are besieged, the more they fight. They have nowhere to go,” said soldier Faris Sallal in Islah al-Ziraie district, which echoed with intermittent gunfire and occasional artillery fire.

Flies swarmed the charred remains of an Islamic State militant lying near a motorcycle. In the garage of a house on the same street was an armored car equipped with a suicide bomb.

In the nearby neighborhood of Ureibi, partly controlled by Iraqi forces, a Reuters reporter saw the bloodied corpse of an Islamic State sniper in a children’s room on the upper floor of a house.

Iraqi forces, who now use the house as an outpost, said the sniper was targeting advancing Iraqi troops.

“Our intelligence findings based on inside sources and drone surveillance definitely indicate that Daesh fighters are less organized now and lack the resources to continue fighting,” he said.