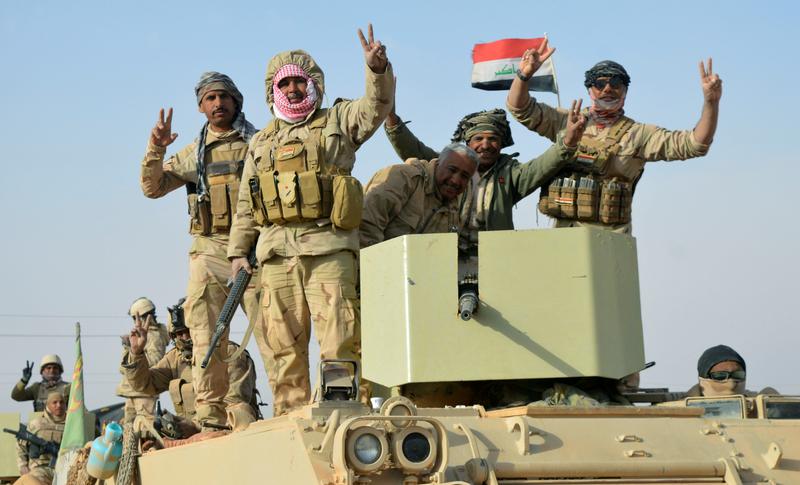 Rawa’s capture marks the end of the Islamic State’s era of territorial rule over a so-called caliphate it proclaimed in 2014 over large swaths of Iraq and Syria.

The Syrian army has also declared victory against the Islamic State, but last week militants re-infiltrated Albu Kamal, near the border with Iraq, and continue to fight there, as well as in some nearby villages and desert areas.

All forces fighting the Islamic State in both countries expect a new phase of guerrilla warfare, a tactic the militants have already proven capable of.

Prime Minister Haider al-Abadi praised the Iraqi armed forces and people, saying that Rawa had been recaptured in record time and that Iraq would soon completely defeat the Islamic State.

“I congratulate our heroic forces and the Iraqi people for the release of Rawa. The success of our forces, in record time and with excellent planning, shows their strength. Our armed forces continue to secure the Jazira and the desert area as well as the Iraqi border. Total victory is near,” he said.

A map released by the military showed no areas under Islamic State control and a spokesperson for the US-led coalition fighting the group in Iraq and Syria said on Twitter that it was “collapsed”.

A video released by the military showed Iraqi forces radioing a message to residents of Rawa saying, “Daesh has ended for good, and now the era of Iraq begins”, referring to the Sunni militant group as an Arabic acronym.

“With the release of Rawa, we can say that all areas where Daesh is present have been liberated,” a military spokesman said.

Iraqi forces will now focus on eliminating militants who have fled into the desert and exerting control over Iraq’s borders, the spokesman said.

Albu Kamal shares a border crossing with al-Qaim in Iraq. Militants lost control of the border crossing earlier this month, dealing a critical blow to the organization, which had long relied on the road to move its fighters and equipment.

The leader of the group, Abu Bakr al-Baghdadi, is believed to be hiding in the desert along the border of the two countries.

Driven out of its two de facto capitals this year – Mosul in Iraq and Raqqa in Syria – the Islamic State has been gradually cornered in a shrinking pocket of desert, straddling the border between the two countries, by enemies which include most regional states and world powers. .

In Iraq, the Islamic State has faced the military and Shia paramilitary groups, supported by both the US-led international coalition and Iran.

Iraq has waged its latest campaign to crush the Islamic State caliphate while staging a military offensive in the north against the Kurds who staged an independence referendum in September.

However, the defeat of the Islamic State does not mean that civilians are now safe, the International Rescue Committee said. Nearly 3.2 million people are unable or unwilling to return home after years of displacement and more than 11 million are in need of life-saving humanitarian assistance, he added.

“Today marks a historic day for the Iraqi people. It is vital, however, that the international community does not view the end of (Islamic State’s) territorial control as the end of its responsibility to the Iraqi people who have endured years of conflict and are facing a long and difficult recovery.” , the Iraq Group said National Director Wendy Taeuber in a statement.