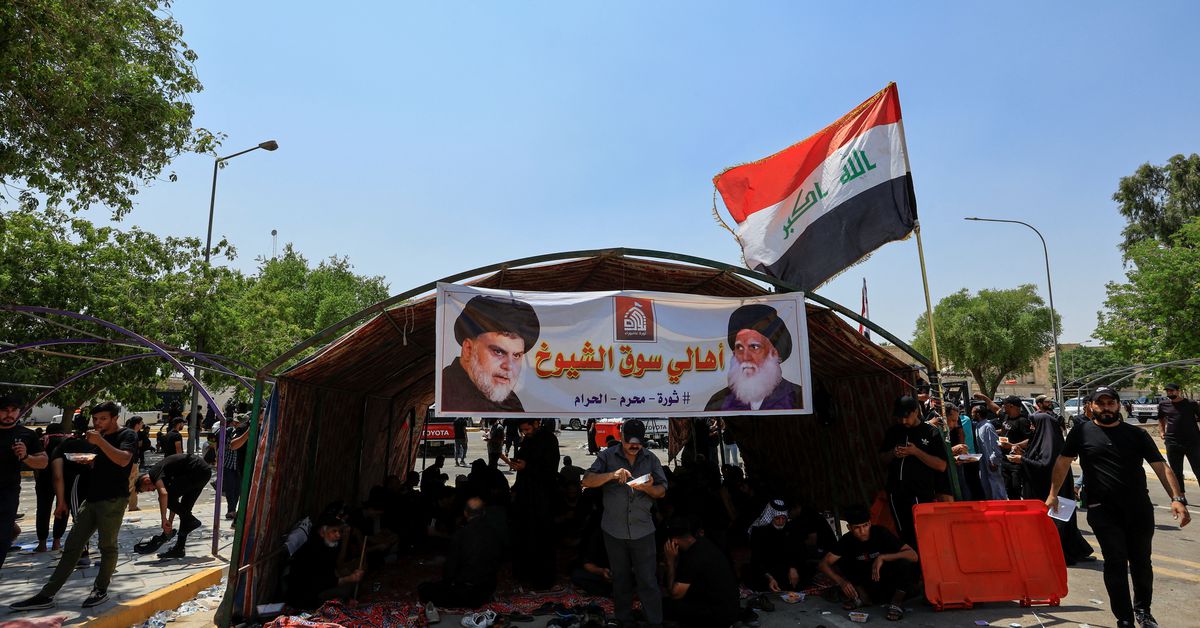 BAGHDAD, Aug 23 (Reuters) – Iraq’s judiciary will resume work on Wednesday after powerful Shia cleric Moqtada al-Sadr called on his supporters to step down from outside his seat, the official INA news agency reported. .

Earlier on Tuesday, the Supreme Judicial Council suspended its work after Sadr’s supporters camped near his seat demanding he dissolve parliament, deepening one of the worst political crises since the US invasion in 2003 .

“In light of the withdrawal of the demonstrators and the lifting of the siege of the seat of the Superior Council of the Judiciary and of the Federal Court, it has been decided to resume work normally in all the courts from tomorrow morning”, indicated the advice.

Populist leader Sadr has helped stoke tensions in Iraq in recent weeks by ordering thousands of supporters to storm and occupy parliament, preventing the formation of a government nearly 10 months after the election.

However, he called on his supporters on Tuesday to withdraw from the area around the judicial authority and to keep only the protest tents and banners outside the building.

In a statement, he also urged protesters to continue their sit-in outside parliament.

The judiciary condemned the gathering of protesters outside its headquarters as “unconstitutional behavior”, adding that protesters sent threatening phone calls.

Prime Minister Mustafa al-Kadhimi, who cut short a trip to Egypt to deal with the crisis, urged calm on all sides and renewed calls for a national dialogue.

In a statement, Kadhimi said the disruption of the justice system “exposes the country to grave risks”.

The stalemate in Iraq is the longest period without a fully functioning government in nearly two decades since Saddam Hussein was toppled in a 2003 US-led invasion.

Sadr was the biggest winner in the 2021 elections, but was unable to form a government with Kurdish and Sunni Muslim Arab parties, excluding his Iran-backed Shiite rivals.

The young cleric, who has unparalleled influence in Iraq, can quickly mobilize hundreds of thousands of supporters to stage protests and cripple the country’s Byzantine politics.

Sadr has called for snap elections and unspecified changes to the constitution after pulling his lawmakers out of parliament in June.

“The people demand the dissolution of parliament and the immediate formation of an interim government,” said a protester draped in an Iraqi flag.

“Help us. Stay with us. Don’t be afraid of anyone,” another protester said.

Sadr’s political opponents, mostly Iran-backed Shiites, have refused to accede to his demands, raising fears of further unrest and violence in a conflict-weary Iraq.

He has survived the upheaval in the 19 years since his Mehdi Army militia attacked Americans with assault rifles and rocket-propelled grenades in the streets and alleys of Baghdad and southern cities.

Most of Iraq’s Shiite political establishment remains suspicious or even hostile to Sadr. Yet his political organization, the Sadrist Movement, has come to dominate the Iraqi state apparatus since the 2018 elections, occupying senior positions in the ministries of interior, defense and communications.