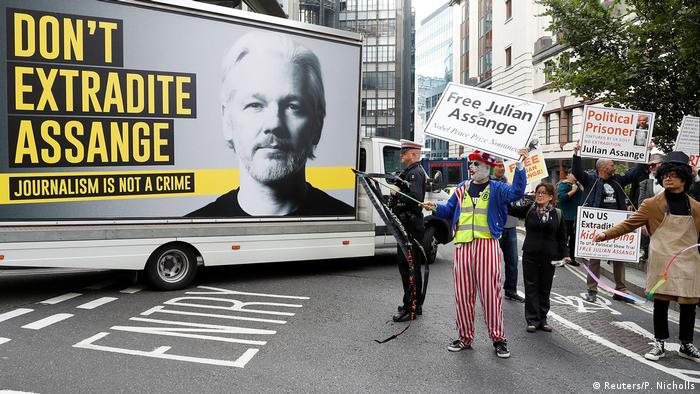 British Home Secretary Priti Patel has approved Julian Assange’s extradition to the United States, where he will face 18 espionage charges brought against him by the Ministry of Justice. The charges carry a combined sentence of up to 175 years in prison. It’s another cut in the long and tortuous crucifixion of the founder of Wikileaks, who dared to embarrass and expose the war crimes of the US empire and its allies.

Wikileaks rose to prominence in 2010 when it posted a video, dubbed Collateral murder, of a massacre of at least twelve civilians in 2007 filmed from the viewfinder of an American Apache helicopter in Iraq. The video shows US soldiers joking as they gun down civilians on a street in Baghdad. Two of those killed were Reuters journalists and two children were injured. Wikileaks also published war logs on the invasions of Iraq and Afghanistan, as well as 250,000 diplomatic cables. The leaks revealed widespread war crimes and sordid, covert dealings by the United States and many other governments.

But those in power were not concerned with the prosecution of these war crimes. Instead, it was whistleblowers and journalists they prosecuted. Assange quickly became public enemy number one of US intelligence agencies and their Australian and British counterparts. Their determination to destroy it has only grown with new leaks, from Edward Snowden’s 2013 revelations of massive illegal surveillance programs, to Wikileaks’ release of huge troves of CIA hack files, dubbed “Vault 7”, in 2017.

Following the Vault 7 leaks, Wikileaks was officially reclassified by then-CIA Director Mike Pompeo as a “non-state hostile intelligence service,” paving the way for much more aggressive action. It was recently revealed that the White House and the CIA were considering kidnappings and assassinations to deal with the threat posed to US imperialism by Assange. Ultimately, the strategy of endless legal persecution, begun under former President Barack Obama, has continued through the Trump years and now under Democratic President Joe Biden.

Although he was never convicted of a minor administrative offense – breach of bail for a charge that was later dropped – Assange has spent the past decade deprived of his liberty and under constant surveillance, first at the Ecuadorian embassy, ​​then since 2019 at Belmarsh prison in London.

The United States charges Assange under the Espionage Act of 1917, an anti-democratic law designed to persecute opponents of American involvement in World War I. As Brazilian journalist Glenn Greenwald writes, the act means that “the defendant is not only guilty as soon as it is proven that he disclosed classified information without authorization, but he is also prohibited from invoking a “justification” defence, which means they cannot argue before the jury of their peers that it was not only permissible but morally necessary to disclose this information because of the serious wrongdoing and criminality they have revealed by the country’s most powerful politicians. In other words, this 1917 law is written to offer only show trials but not fair trials”.

The relentless persecution of Assange by Western governments is such a blatant assault on democratic rights, freedom of speech and freedom of the press, that one would expect the entire establishment liberal rises. But while publications like the Guardian and New York Times have published columns disapproving of Assange’s treatment, their response has been incredibly quiet, and they have often regurgitated the slanders used against Assange: in particular, the widespread claim that, unlike respectable journalists like them, Assange is unprofessional and reckless, cables leaking without thinking of the consequences. This is partly taken from a Guardian book, Wikileaks: At the heart of the war against the secret of Julian Assangewritten by two Guardian journalists who pretended to work in collaboration with Assange in 2011, while drying him out. This book has been repeatedly used against Assange by US prosecutors in hearings in UK courts, despite many of its claims being denied.

Ultimately, Wikileaks’ mission clashed with what these publications stand for – putting a more liberal and humane face on capitalism and Western imperialism. Assange and other whistleblowers are shaming all slavish liberal journalists for speaking truth to power. He was therefore condemned not only by the Murdoch press and the Trumpian right, but also by the liberal press, the American Democrats and the Australian Labor Party. One of the most egregious examples is that of PEN America, an organization supposedly dedicated to fighting for press freedom, but whose CEO, Suzanne Nossel, has justified charges and extradition attempts against Assange. Nossel previously worked for the US State Department’s special task force set up to respond to Wikileaks, under Secretary of State Hillary Clinton, who later tried to blame Wikileaks for her defeat in the presidential election. of 2016.

Many are hoping that Prime Minister Anthony Albanese could finally signal a change of leadership in Australia and fight for Assange, who is, after all, an Australian citizen. While in opposition in 2021, Albanese said he “did not see the point of the ongoing prosecution of Mr Assange”. But since becoming prime minister he has remained silent, hiding behind claims that “not all foreign affairs are done better with the megaphone”. There is a terrible irony in this, because a key part of Wikileaks’ goal was to expose and subvert precisely this kind of covert, covert and irresponsible diplomacy.

Labor has the form of backing the US persecution of Assange. It was former Labor Prime Minister Julia Gillard who in 2011 said, without any charges being brought let alone a trial or conviction, that Assange had acted “unlawfully” – only for the police to Australian federal government announces two weeks later that it could not find any laws Assange had broken. Former New South Wales Labor Prime Minister Bob Carr has said publicly that Albanese should demand that the US stop prosecuting Assange, but he fails to mention that when he was Gillard’s foreign secretary , he did no such thing. The PLA is once again putting on a show for the Australian state, with its expanding military budgets, its renewed imperialist AUKUS alliance and its determination to maintain its dominance of the Pacific ‘family’ against its rival, China. Whistleblowers like Assange and Witness K, who exposed the East Timorese government’s illegal Australian wiretapping, only stand in the way of such a program.

The slow legal lynching of Assange was always intended to silence a popular and courageous critic of imperialism and lying governments, and to send a message to all other would-be whistleblowers and journalists that possess both a conscience and a backbone would be a career and a life. end. The fact that Assange never even committed these “crimes” of telling the truth on American soil, but faces extradition to that country, means no one is safe. Speak up, wherever you are in the world, and you could languish in an American prison for life, is the clear message. It reveals once again how hollow any democratic commitment is for the Western powers.

But the fight is not over. Assange still has legal options to appeal and delay extradition, giving his supporters time to continue demanding his freedom from the US, UK and Australian governments.