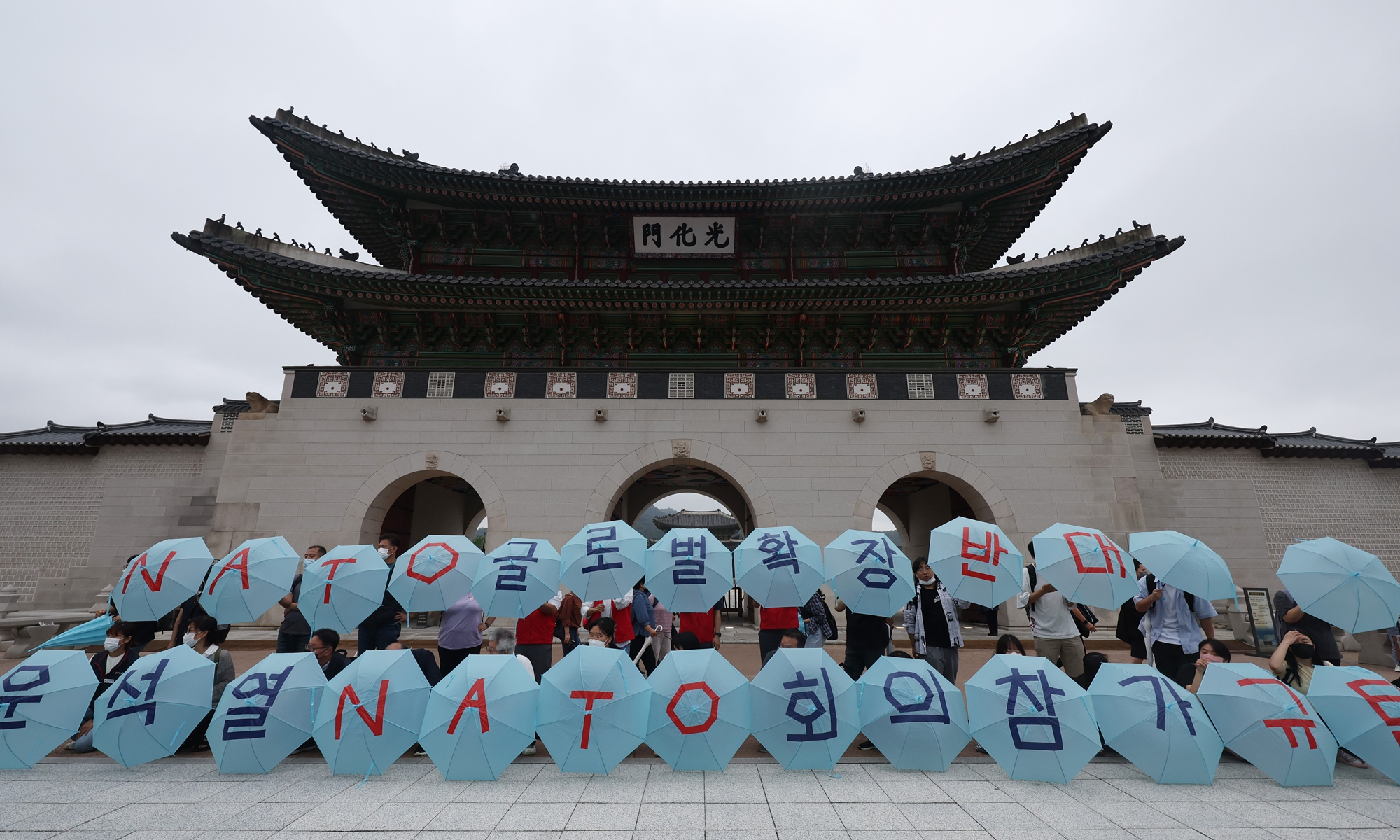 Amid the still ongoing Russian-Ukrainian military conflict, NATO, which fueled the conflict, held a three-day summit in Madrid, Spain, from June 28-30. The NATO alliance has worked to increase pressure on Russia over its conflict with Ukraine while underscoring their lingering concerns about China. For the first time in history, Japanese and South Korean leaders have been invited to attend the NATO summit. The militant group that has once been a source of trouble for Europe is now trying to create its own Asia-Pacific chapter to meddle in Asia. How was the organization born? How did it arise out of Cold War mentality and gradually become an obstacle to world peace? Why is this military alliance extending its “black hand” to Asia? The Global Times will publish a series of four articles on NATO expansion. This is the last installment. In 1997, NATO officially invited Poland, Hungary and the Czech Republic to join its ranks, laying the groundwork for NATO’s first eastward expansion in 1999 since the end of the Cold War. In 2022, for the first time, the leaders of four countries – Japan, South Korea, Australia and New Zealand – were invited to the NATO summit in Madrid to apparently set the expansion in motion. from NATO to Asia-Pacific.

NATO’s first secretary general, Lord Ismay, said the organization’s aim was ‘to keep the Russians out, the Americans out and the Germans out’, which says a lot about NATO’s long-standing role in Europe.

In the 1990s, former US Under-Secretary of State Strobe Talbott, who was responsible for NATO’s post-Cold War expansion, repeatedly asserted that NATO, despite being a military organization, had a broad political function and that its expansion was a powerful engine for the “Westernization” of the political and social systems of the member countries.

Indeed, for the United States, NATO is undoubtedly a “security community” whose principle is to ensure the absolute military superiority of Washington. This regional security architecture has three important characteristics: the dominance of US hegemony, the hierarchy of states within the order, and explicit exclusion.

For a long time, the vast majority of the American political elite have openly declared that NATO is the most important strategic resource of the United States to ensure its global hegemony. Without NATO, the United States would lose the tools to control European countries, and it would be more difficult to promote the evolution of the security order on the Eurasian continent in accordance with the interests of American hegemony. Almost every major strategic change in NATO’s history has been led by the United States.

Since the end of the Cold War, the United States and Europe have been at odds over whether NATO expansion should be limited to Europe or extend beyond it. However, from heavy intervention in the Balkan wars in the 1990s, to intervention in Iraq and Afghanistan in the 2000s, to today’s more frequent involvement in Asia-Pacific affairs, the NATO has moved beyond the limits of dealing only with European affairs and is constantly redefining its functions in accordance with updated US global strategy.

Bringing the “European Divide” to Asia-Pacific

Over the past 10 years, NATO, through global partnership programs, has pooled the resources of Asia-Pacific allies to focus on “dealing” with the Afghan issue and accelerated the security and defense coordination with Japan, South Korea, Australia and New Zealand. Zeeland.

Led by the United States, NATO is rapidly applying the “experience” it has acquired over the past 30 years in the direction of European security by creating divisions in Europe in the practical process of building security systems. Asia-Pacific-specific security.

In recent years, while constantly trying to promote the integration of existing alliance mechanisms in the Asia-Pacific region, the United States has pushed NATO to fully establish itself in the Asia-Pacific as soon as possible in terms of institutions and actions.

When the leaders of Japan, South Korea, Australia and New Zealand attended their first NATO summit in late June, the political message was clear: there will be more frequent coordination and more depth between NATO and US allies in Asia-Pacific. The idea of ​​expanding NATO into Asia plays an obvious role in US Indo-Pacific strategy.

The United States now hopes to adjust its existing alliance ties by strengthening small mechanisms in order to build a large security system. 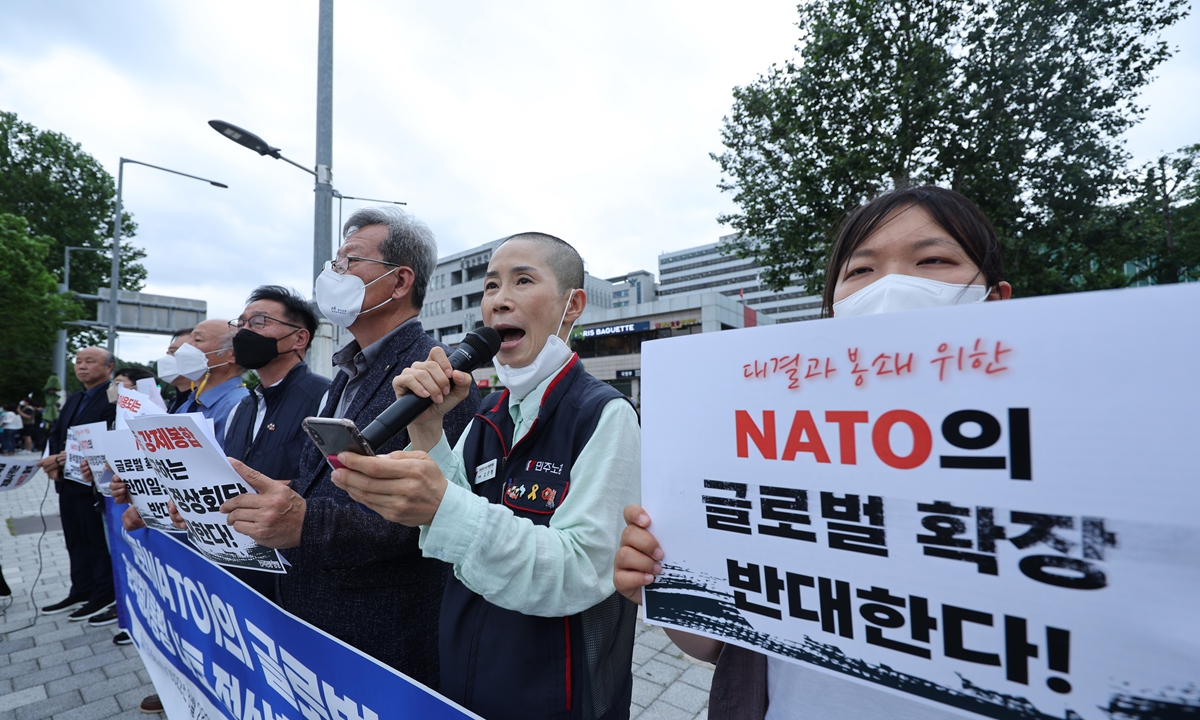 South Korean activists hold a rally near the president’s office on June 28 to protest against NATO’s invitation of leaders of Asia-Pacific countries to the NATO summit. Photo: CGV

As its strategic focus continues to shift eastward, the United States has dramatically accelerated the pace of building the Asia-Pacific security framework. On the one hand, the United States is pushing Asia-Pacific countries, including Japan, South Korea, Australia and New Zealand, to strengthen their ties and cooperation with NATO. On the other hand, US dignitaries, including President Biden, have also visited other Asia-Pacific countries frequently, creating an international atmosphere of “Sinophobia” and promoting alignment of security and defense strategies. countries visited with NATO. By these means, the United States wants to accelerate the formation of a regional and even global security system with NATO at its heart to contain China.

Such measures taken by the United States are similar to what the United States has done in Europe to escalate the conflict between NATO countries and Russia. NATO’s eastward expansion led to the Russian-Ukrainian conflict in Europe as well as the final Russia-NATO standoff and the Great Divide of Europe. Thus, the “Asianization” of NATO, led by the United States, will be disastrous for the Asia-Pacific region and will undermine regional peace and prosperity. This military alliance will force Asia-Pacific countries to take sides between China and the United States based on its logic of geopolitical competition between great powers, leading to increasingly intense regional crises and conflicts in the region. Asia-Pacific, and it is likely to cause a major crisis. the security and economic divide in the Asia-Pacific region, thus seriously interrupting the process of regional economic integration.

According to the 2022 Strategic Concept adopted at the NATO summit in Madrid (June 29-30), the military alliance has three main tasks over the next decade: deterrence and defence, crisis prevention and management, and cooperative security. In terms of deterrence and defense, the United States and its allies are increasing their military spending, which will trigger an arms race in several regions and lead to regional tensions. In terms of crisis prevention and management, we must remember that NATO carried out what is called “crisis prevention and management” in Yugoslavia, Iraq, Afghanistan and other countries, and the consequences of these actions by Washington are evident to the entire world. In terms of so-called “cooperative” security, if NATO wants to strengthen its presence in the Asia-Pacific region, it risks creating a serious crisis in the Taiwan Strait and the South China Sea.

In this process, its so-called global partnership will progress rapidly. This process will also change the internal political, economic and social systems of other countries. In the complex Asia-Pacific region, NATO’s approach will inevitably lead to contradictions and conflicts.

Undermining the authority of the UN

If the “Asianization” of NATO goes smoothly, eventually a global NATO security pattern will emerge. It will be central to the United States’ global security plan, but it’s not something genuinely peace-loving nations would like to see.

The North Atlantic Treaty provides that the Parties to this Treaty reaffirm their faith in the purposes and principles of the Charter of the United Nations and their desire to live in peace with all peoples and all governments.

NATO has also affirmed that its commitment to “collective defence” is based on the right of individual and collective self-defence guaranteed by Article 51 of the United Nations Charter. However, NATO waged the Kosovo war without UN authorization and tampered with the UN resolution to launch a regime change war in Libya and constantly conducted military operations outside its area. defense.

All of these activities have demonstrated that NATO’s missions and operations deviate completely from the Charter of the United Nations. The organization has become increasingly offensive, and a “weapon” and accomplice of US hegemony.

NATO is creating new divisions and block confrontations in the Asia-Pacific region by classifying countries according to its own needs. This year, NATO held several meetings and the Madrid Summit to discuss the institutional arrangement to enhance coordination with US allies in the Asia-Pacific regions. These meetings, without exception, highlighted the “Chinese threat”.

The recent reiteration by NATO of the importance of establishing and establishing international rules is worth highlighting. It is true that the lasting stability of State-to-State relations cannot be achieved without respect for international rules by all parties. However, a military alliance that promotes “civilization superiority” and “sovereignty relativity” theories and meddles in bloc politics is unlikely to promote rules recognized by the vast majority of countries in the world. . The future global security system should not be built around the “world NATO” alliance system, but should return to the rational and sound way of consolidating the central role of the UN.