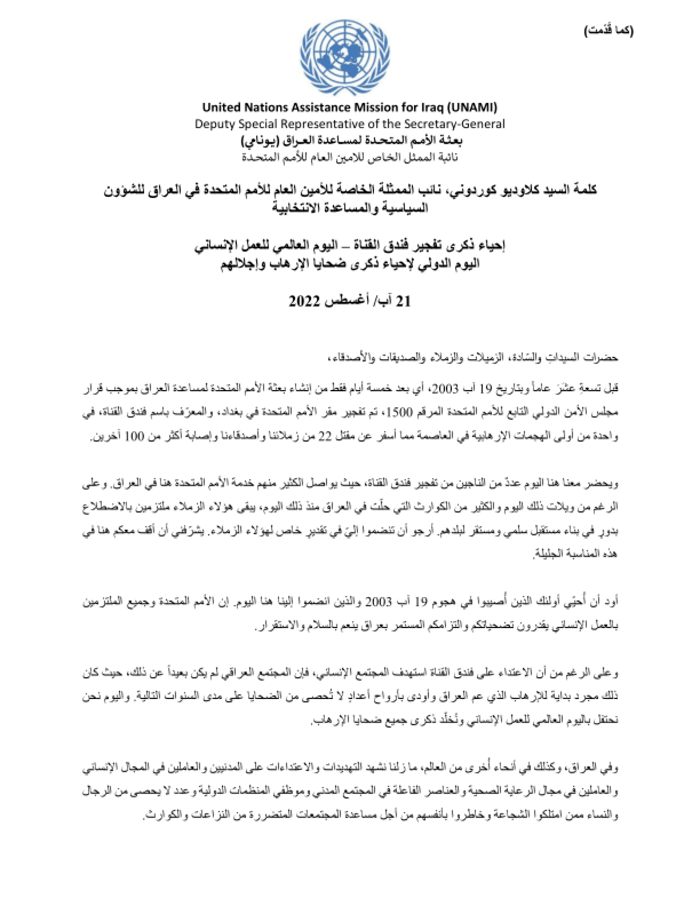 Nineteen years ago, on August 19, 2003, just five days after UNAMI was established by UN Security Council Resolution 1500, the UN headquarters in Baghdad, also known as the Canal Hotel, exploded in one of the first terrorist attacks in the capital. Twenty-two of our colleagues and friends were killed and over a hundred people were injured.

A number of survivors of the Canal Hotel bombing are with us today. Many of them continue to serve the UN here in Iraq. Despite the horrors of that day and the many disasters that have befallen Iraq since, these colleagues remain determined to play a role in building a peaceful and stable future for their country. Please join me in paying a special tribute to these colleagues. I am honored to be here with you on this solemn occasion.

I would like to greet those who were injured in the attack of August 19, 2003 and who have joined us today. The UN and all those engaged in humanitarianism appreciate your sacrifice and your continued commitment to a peaceful and stable Iraq.

While the attack on the Canal Hotel targeted the humanitarian community, Iraqi society was not spared: the attack was only a prelude to the terror that would engulf Iraq and claim countless victims in the following years. Today we celebrate World Humanitarian Day and pay tribute to all victims of terrorism.

In Iraq, as well as in other parts of the world, we continue to witness threats and attacks against civilians, humanitarian workers, medical professionals, civil society actors, international organizations and countless brave women and men who put themselves at risk to help communities affected by conflict and disaster.

It is therefore a well-deserved tribute that the General Assembly has designated 19 August, the day of the bombing of the Canal Hotel, as World Humanitarian Day, to pay tribute to the humanitarian workers who have been killed or injured in the line of duty. This year, we are drawing attention to community engagement and joint action. The first people to respond to the crisis are the communities themselves, joined by local volunteers, emergency services, local and national authorities, NGOs, UN agencies and countless others. Humanitarian action is proof that unity and solidarity are still alive and strong. Alone our impact is limited, but together we make a bigger difference.

I joined UNAMI a week ago as the new Deputy Special Representative. However, I also had friends who were killed or injured in this attack. August 19 has always been a day of reflection for me and for all of us at the United Nations and beyond. It is a great honor for me, as a first UNAMI officer, to be here with you today to commemorate the sacrifices of our twenty-two colleagues who have fallen in the service of peace in Iraq. By honoring them, we also commemorate and honor all those who have lost their lives in the service of humanity, and all victims of terrorism. Our continued commitment to peace and justice is their legacy and our inspiration.