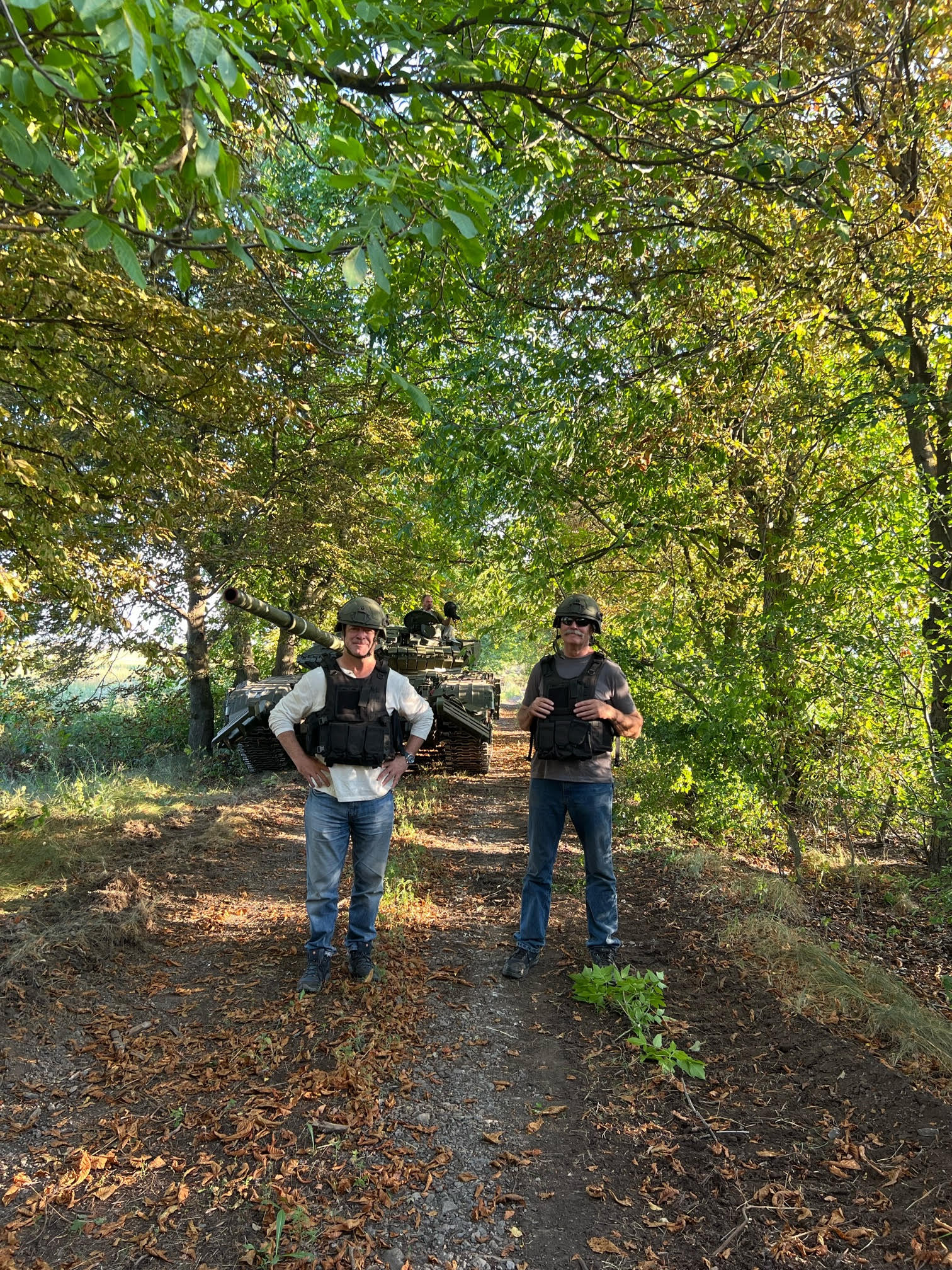 Ukraine has earned our respect and trust: we must fully arm Ukraine to defeat Russia

Ukraine has earned our respect and trust: we must fully arm Ukraine to defeat Russia

Dan is President of Thayer Leadership and a 1988 graduate of the United States Military Academy at West Point. He served as an Airborne-Ranger qualified field artillery officer, then voluntarily re-commissioned into the infantry for service in Iraq and was awarded the Purple Heart. Dan is an unpaid special adviser to General Valeriy Zaluzhny, Commander-in-Chief of the Ukrainian Armed Forces.

Lee graduated in 1974 from the United States Military Academy at West Point. During his 25-year career in the military, he served 11 years with the First Special Forces Operational Detachment-Delta (Airborne), participating in numerous classified combat operations, worldwide, while exercising a leadership function. He was CEO of Triple Canopy, the largest security company in Iraq with 6,000 employees at the height of the Iraq War. He was awarded the Ranger Tab, Special Forces Badge, Silver Star, Purple Heart, and many other accolades. Lee is a faculty member of Thayer Leadership.

The prevailing attitude here in Kyiv is that many members of the US government do not yet trust the Ukrainian people. It is a sentiment that we believe is correct and must be corrected immediately in the interests of US national security. We have personally traveled the battlefields with commanders of the Ukrainian Armed Forces in Kyiv, Moschun, Bucha, Iripin and Donbass, so we have unique insight into their attitudes and values. The Ukrainian army deserves our ultimate respect and trust. As such, the United States should fully arm Ukraine as if it were arming American troops to fight against the entire Russian military. Continuing to approve and send small quantities of arms and ammunition at a time could result in catastrophic loss for Ukraine and, by extension, the United States.

Why should Ukraine have our respect and trust? Ukraine has been at war with Russia for eight years, ever since Russia forcibly took Crimea and infiltrated eastern Ukraine in 2014. Although they are underreported in the West, the fact is that the fighting did not stop in 2014. And now every day 100-200 Ukrainians die in artillery barrages in the east and south, not to mention the huge structural losses. They earned our respect and trust the hard way. Ukraine has proven itself in combat. NATO is made up of 32 nations and was originally formed to deter and/or fight the Soviet Union, now Russia, through a united coalition. Now Russia has targeted a country – with 10% of Russia’s GDP – and Ukraine is fighting the 2nd largest army in the world – on its own.

Ukraine has clearly demonstrated its united will to fight against Russia, but it needs additional support from the US government to win. This is not a civil war with internal factions fighting each other, or a weak/ineffective central government, as we encountered in Iraq and Afghanistan. Russia is clearly an illegal, immoral and amoral aggressive nation. After Ukraine, which country is next? One cannot help but think of John F. Kennedy’s famous quote: “Let every nation know, whether it wishes us well or ill, we will pay any price, bear any burden , face any challenge, support any friend, oppose any foe. to ensure the survival and success of freedom. The Ukrainian people live this reality on a daily basis.

For Ukraine to have any chance of succeeding against this aggressor, we need to stop using a slow drop weapon strategy and deliver what they need. Once the need for more weapons was critical after securing Kyiv at the start of the war, the United States sent 4 multiple rocket launcher systems (M142 HIMARS wheeled rocket launchers). Only 4 for a country the size of Texas. We have increased this number every few weeks, and have now given 16 and promised 4 more for a total of 20. We need to give more.

Ukraine is not asking for US combat troops; they are very proud to fight this war themselves. However, they do not claim to have adequate weapons and ammunition to succeed. They are extremely grateful for the help the US government has provided to date, but they need much more in the short term. The daily loss of Ukrainian lives could be greatly reduced if we accelerated the pace of assistance.

A powerful argument can be made that the United States previously had a moral obligation to provide the maximum support Ukraine now needs, as we helped convince them to relinquish control of its nuclear arsenal and Black Sea Fleet when the Soviet Union collapsed. . Ukraine complied and renounced its nuclear weapons, risking its life, knowing that these weapons had a deterrent effect against Russia.

Russia poses one of the greatest threats to America today. As Putin drains Russian blood and treasure into Ukraine, it only makes sense that we support Ukraine to further weaken Russia. Failure to do so could lead to the opposite result: a stronger Russia, a defeated American friend and ally, and a weakened United States in the eyes of the world.

Ronald Reagan said “Trust but verify” about Russia. At this point, we can trust Russia to act more brutally, at great cost to Ukraine and the world. As we entrust Ukraine with more armaments, we should also verify its proper use by sending US special forces advisers, trainers and monitors. Ukraine invites the United States to send advisers to present their logistics and track all weapons and ammunition. Our forces will also draw valuable lessons learned from fighting a close competitor with minimal risk. This would address the concerns of those focused on Ukrainian accountability with our help and allow us to send them what they need now. It would also address the real concern about historic Ukrainian corruption, which needs to be factored into the equation. 38 million freedom-loving people should not be sacrificed because previous Ukrainian governments received negative marks for corruption.

Delaying these large arms deliveries prolongs the war, costs more Ukrainian lives, and will cost the West more in the long run. Ukraine’s economy has been destroyed by the Russians and the West is now funding $5 billion a month to fund the Ukrainian government. Ending the war will help get Ukraine back on its feet economically so the West doesn’t have to keep funding $5 billion a month.

Ukraine requested 100 High Mobility Artillery Rocket Systems (HIMARS), and we only promised 20. Ukraine requested 300 M777 Howitzers, and we only provided 126. Ukraine requested the MGM-140 Army Long-Range Tactical Missile System (ATACMS), pledged to target only Russian positions in Ukraine – not to attack inside Russia. We didn’t give them ATACM, but we need it, so the Russians have nowhere to hide in Ukraine. There are obviously additional needs for drones, armor, vehicles, suicide drones, but since Ukraine forced Russia into a long-range artillery duel, in which they are vastly outnumbered, the systems of weapons above represent the most pressing and urgent need. These HIMARS howitzers and systems are also being processed from Presidential Withdrawal Authorization, which means they are used, our army’s surplus inventory, so they can be immediately dispatched and in the fight to make a difference and start saving Ukrainian lives.

Putin and his generals only respect force. The Russian army in Ukraine behaved like an immoral, amoral and well-armed terrorist organization. Let’s continue to act to stop them, now. We should send Ukraine the number of weapon systems it needs now, not piecemeal, before it’s too late.