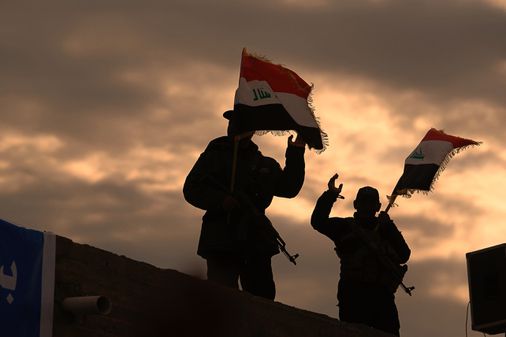 BEIRUT – Unidentified planes struck targets in Syria near the border with Iraq on Friday, killing eight Iranian-backed Iraqi militiamen, Syrian militants and two Iraqi officials said, an attack that comes against the backdrop of growing tensions between the United States and Iran.

The Syrian Observatory for Human Rights said the planes were targeting positions belonging to pro-Iranian militias in the Boukamal area, near the border with Iraq. The Britain-based organization, which documents the war in Syria through a network of activists on the ground, said the planes struck, among other targets, weapons depots and vehicles belonging to militias.

An Iraqi security official and another official, who belonged to the Iranian-backed Iraqi militias known as the Popular Mobilization Forces, said warplanes targeted two vehicles carrying missiles on the Syrian side of the border. The strike was most likely carried out by Israeli warplanes, they said, but offered no evidence.

The IDF made no immediate comment. The Pentagon did not respond to a request for comment on the bombing in Syria, which comes at a time of high tension between Iran and the United States

Iraqi officials identified the eight victims as Iraqi militia fighters while the Observatory only said the eight were not Syrians, without giving their nationality. The death toll could rise further, officials said, as there were also injured militiamen, some of whom are believed to be in serious conditions.

Another Iraqi official said those targeted were from the Imam Ali Brigades, an Iran-backed faction within the PMF. The three Iraqi officials spoke on condition of anonymity as they were not authorized to make statements to the media.

Israel has repeatedly struck Iran-related targets in Syria in recent years and has warned of any permanent Iranian presence on the border.

Deir Ezzor 24, an activist collective reporting the news in the border area, said the planes hit trucks carrying weapons as well as ballistic missile depots in the area. Omar Abu Laila, a European-based activist from Syria’s eastern Deir el-Zour region who heads the group, said the attack sparked “a huge explosion” heard on the Syrian-Iraqi border.

The Sound and Picture, another group of activists from the Deir el-Zour region, said “unidentified planes” hit militia targets in Boukamal. There was no immediate comment from the Syrian authorities.

The airstrikes reported on Friday came days after a U.S. drone strike killed Iran’s most powerful general after landing at Baghdad airport, sparking calls for revenge and heightening tensions on the waterfront. ‘all-out war between the two sides.

Iran retaliated by firing a barrage of missiles at military bases in Iraq hosting US troops. Since then, both sides have signaled that they are pulling out of further escalation, but tensions remain high and the region on edge.

Amid rising tensions, Russian President Vladimir Putin paid a rare visit to Syria this week for talks with President Bashar Assad in Damascus. Russia has been a key ally for Assad, providing crucial military and political support throughout the country’s civil war.

The area affected on Friday is the key to a land corridor for Tehran that connects Iran through Iraq and Syria through Lebanon. Friday’s Observatory report claimed that Putin informed Assad during the visit of a US intention to “shut down” the land corridor for good.