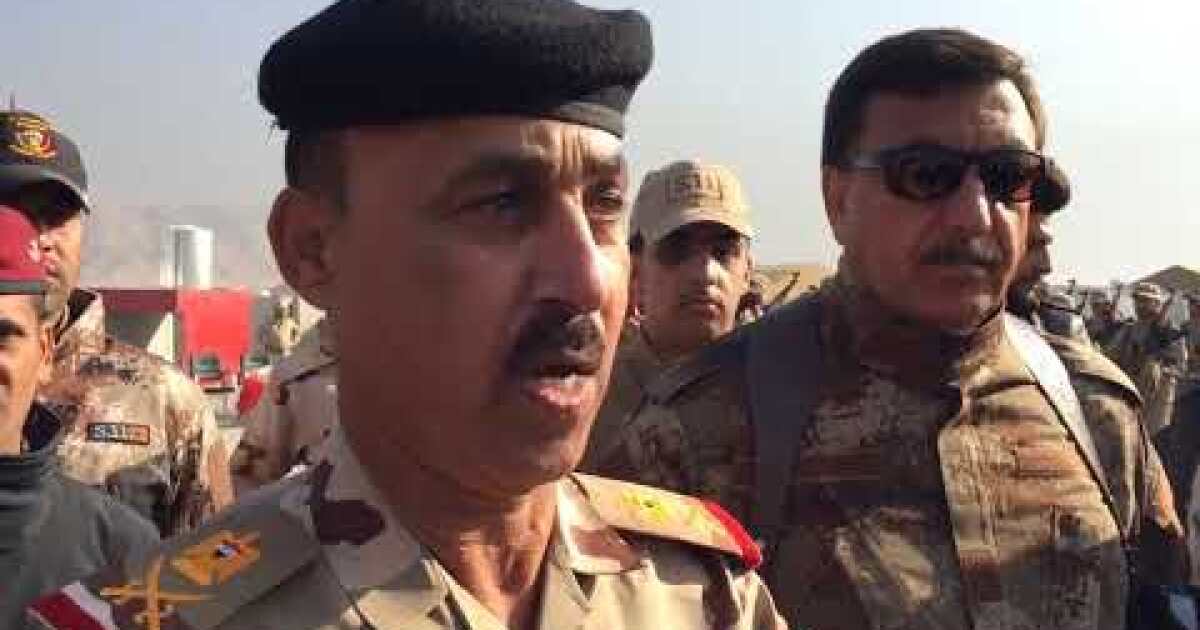 In significant departure from past policy, US-led forces in Iraq began to arm and train hundreds of fighters belonging to Shiite militias historically known for their ties to Iran.

Sectarian militias are trained for the operation to reconquer the Iraqi city of Mosul. While Mosul’s future remains uncertain, the cooperative effort is expected to bolster Shiite forces both militarily and politically.

The US-led coalition has provided hundreds of weapons and training to fighters in recent weeks, indicating a new level of cooperation, though US military officials were quick to downplay it, saying the fighters-in-training had no connection with the Iranian-backed groups. that targeted Americans in the past.

Responding to The Times reports, Colonel John Dorrian, spokesman for the US military in Baghdad, insisted that “US policy on this issue has not changed.”

“We are only forces that we can control,” Dorrian said. â€œYou assess to make sure they are not associated with terrorist groups or groups associated with the Iranian government. They must be with groups that promote respect for human rights and the rule of law.

Dorrian admitted that some militias are still classified as terrorists by the United States, but insisted that those trained had no ties to groups that have “American blood on their hands.”

But US officials have recognized the difficulty of fully controlling all members of the militias. And the top leadership of the Shiite forces includes individuals who have been considered terrorists by the United States.

After successfully fighting the Islamic State elsewhere in Iraq, the militias received the government’s blessing to participate in offensives, including the one to retake Mosul, launched on October 17.

Mosul is the second largest city in Iraq, with a diverse population of over one million, and was the biggest prize won by Islamic State in its drive to create a “caliphate” in Iraq and in Syria.

Its population is predominantly Sunni Muslims, the sect that the Islamic State claims to represent, and some human rights groups feared that allowing Shia fighters to join the offensive could spark a sectarian conflict.

But the Shiite militias – which have integrated Sunnis and other sects into their ranks – have promised to follow the orders of Iraqi Prime Minister Haider Abadi. Last month, the Iraqi parliament passed a law making the militias a legal military body. Their leaders hate being called militias, noting that they have government backing.

Coalition forces screen Shiite militia commanders using the databases of law enforcement and intelligence agencies of the United States and its allies to eliminate exclude those with ties to terrorist groups or Iran-backed Shiite militias, according to US officials who were not authorized to speak publicly about the training.

“We will be reviewing and vetting all the leaders,” an official said.

But the United States is going unable to control all the militia infantry, officials said. And others have noted that there are still leaders associated with militias who fail to follow US guidelines for acceptable allies.

Among the most powerful is Hadi Ameri, the head of the Badr Organization, the military wing of a Shiite political party. Ameri recently defended his long-standing ties with Iran by visiting militia fighters on the front lines. His group’s role in the offensive should help his party in next year’s election.

“This is a mistake,” said Michael Pregent, a former Army paratrooper who served in Iraq and is now an Iraq expert at the Washington-based Hudson Institute. The Shiite militias, he said, were â€œdirectly involved in the murder of Americans. They are sectarian.

Ameri’s senior political adviser Haitham Mayahi said militia leaders agreed to train up to 900 new fighters. to help expand their ranks and hold towns once they are cleared of Islamic State militants.

Shiite militias were accused by the US-led military coalition of committing sectarian crimes against Sunni populations in areas under their control.

The United States refused to provide air support to militias in an offensive last year in Tikrit, after photos of Major General Qassem Soleimani, commander of the elite Iranian Quds special forces and ally were posted online. militia leaders drinking tea outside of town. His role in the battle unsettled US officials, who declared Soleimani (nicknamed “the phantom commander”) a terrorist and accused him of leading deadly attacks against US forces in Iraq a decade ago. .

The militias attempted to take Tikrit back from the Islamic State, but were ordered to withdraw when their month-long offensive stalled. It was only after the Iraqi military took control that US warplanes supported the operation, which ultimately ousted the militants.

The Popular Mobilization Forces, known in Arabic as Hashd al Shaabi, were later accused of destroying hundreds of homes and businesses during the offensive, according to a report by Human Rights Watch.

In October, Amnesty International documented allegations that militias abused and killed Sunnis during the spring offensive to resume the city of Fallujah.

Last month, during the Mosul offensive, Human Rights Watch reported that some Popular Mobilization forces arrested and beat herdsmen in a village near Mosul whom they suspected to be Islamic State militants. .

After the Iraqi parliament passed the law legalizing the militias, US and coalition special forces began training 500 of the new recruits, many of whom are Sunnis, at several sites outside Mosul on December 4, said Dorrian.

He said the recruits came from areas outside Mosul held by ISIS. Once the cities surrounding Mosul have been reconquered, the new fighters will help secure them. They received Kalashnikov rifles, 10 days of training and the promise of monthly salaries of $ 500 to $ 600, commanders said.

Brett McGurk, the State Department’s special envoy for combating ISIS, said many Shiite militias are operating outside the command and control of the Iraqi government, “which is a significant problem.”

But under their aegis, he said, are invaluable local forces to hold the ground in areas with which they are familiar. â€œWe cannot do this only with the Iraqi security forces,â€ he said. â€œWe needed the tribes to mobilize.

Pentagon officials have stressed that militia commanders will be screened and recruits must obey federal law Leahy, named after Vermont Senator Patrick J. Leahy, which prohibits the Pentagon from providing military assistance to foreign fighters who violate human rights.

U.S. and coalition trainers stood alongside militia recruits on a shooting range at a former Iraqi military facility south of Mosul on Sunday, offering advice on how to reload their rifles. Trainers said they also taught citizen soldiers how to stop bleeding in the battlefield and how to avoid and defuse bombs.

A US special forces trainer in unmarked camouflage uniform, who asked not to be identified for security reasons, said he believed he was helping save the lives of fighters, many of whom were untrained civilians : taxi drivers, carpenters and waiters.

He said some had never wielded a gun, but were enthusiastic students, more so than the local forces he had trained in Afghanistan and Yemen.

Many of the recruits were Sunnis Arabs, but there were also Christians, Kurds, Turkmens, Yazidis and Shiites, the commanders said. While many were untrained, some were former police officers and soldiers, including a few who had fought US forces as part of the army of former Iraqi leader Saddam Hussein.

â€œWe were enemies. Now we are friends, â€said Usmat Mohamed, 47, a former soldier from a Sunni tribe.

Gahzi Abar, a militia commander who is a Sunni Turkmen, said that “the reason we have become Hashd al Shaabi is that it is now an organized and legalized force.”

“Our affiliation is with our country and not with neighboring countries,” he said.

Some experts have said it is wise for the United States to make inroads with Shiite militias now, before Mosul is recaptured and a sectarian struggle for control begins in earnest.

“The more they get involved with them, the better they understand and avoid misconceptions and misunderstandings between the two,” said Mowaffak Rubaie, Iraq’s former national security adviser, now a member of parliament. who supported the legalization of militias.

â€œOne thing that has been realized by US officials is that in Iraq, if you pull out, you leave a lot of influence to Iran,â€ said Renad Mansour, an Iraq scholar at the think tank based. at London Chatham House.

Others warned the roster could backfire on the United States

Foreign House Speaker Ed Royce (R-Fullerton) urged Abadi this year to curb the militias. Royce said this week that it was always risky for the United States to get involved in the groups.

“The Shiite paramilitary forces – many of which are funded, armed and even led by Iran’s Islamic Revolutionary Guard Corps – are responsible for horrific human rights violations,” he said. “The Obama administration is playing with fire.”

Hennessy-Fiske reported from Kalah Sur and Hennigan from Washington.

Islamic State may be losing ground, but its recapture of Palmyra in Syria shows it is still a threat

ISIS kills civilians, but these Mosul residents are still not fleeing

December 14, 10:25 a.m .: This article has been updated with further responses from the US Army.

This article was originally published at 4:45 p.m. on December 13.

Iraqi forces in Mosul performing ‘at their peak’, says US commander | Iraq